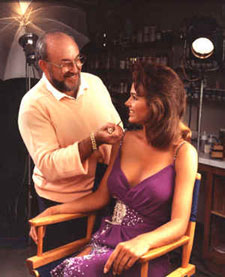 “Give me three minutes a day and I’ll give you better looking skin in a week.” So says four-time Emmy Award nominee, Bob Sidell, one of Hollywood’s top make-up artists for over 30 years. As an industry veteran, Bob’s extraordinary SilkSkin product line has shed an entirely new light on skin care.

Bob began working as a make-up artist on a variety of television programs, including shows hosted by Dean Martin and Danny Thomas, and “Laugh-In.” You can see Bob Sidell’s talent with a make-up brush on Kathleen Turner, Joan Collins, Dolly Parton, Jacklyn Smith, Heather Locklear, and Drew Barrymore among many others.

Bob’s first foray into skin care was in 1972 while working on the show, “The Waltons”.

“I had children, ages six to 21, to make up,” Bob recalls. “Adolescent skin tends to be problem skin, so the most obvious solution would have been to use heavier make-up. However, the show was supposed to take place in the Appalachians in the ’30’s and the producers insisted that the kids look absolutely natural.”

“I started looking around for a good moisturizing underbase, something which was thinner and smoother that they could wear under their make-up and that wouldn’t aggravate skin problems. I found there was no such product available.”

Taking matters into his own hands, Bob began working with a chemist to develop an underbase that would meet his needs. The resulting cream worked extremely well, not only for teenagers, but also for actors and actresses of all age groups who saw the incredible benefits of regular use, even at home. Word spread among make-up artists and performers throughout the industry.

In 1985 a manufacturing plant was established and Bob Sidell’s SilkSkin was born. Through a rare combination of innovation, science and hands on expertise, Bob has created an entire product line that represents the best the cosmetic industry can offer.

In addition to his SilkSkin activities, Bob Sidell is a popular and articulate speaker who gives beauty lectures and seminars around the country on a regular basis. He is also very actively involved with a number of charitable organizations including fund-raising and donations for St. Judes Children’s Hospital. In 1989 he was honored by St. Judes Research Center with the distinguished Founders Award.